The Songs That People Sing

And a little bit of blog tennis with Ally and a version of a track I only knew by Odyssey for years.  Here’s that legend of soul Lamont Dozier with his beautiful version of Going Back To My Roots.  I never knew he wrote it; I can almost hear Levi Stubbs singing it…

Boys And Their Toys

Regular readers will know how much I love my old soul, there has been plenty of Northern Soul on these pages. There are several sources in my life for this love. Paul Weller was a huge influence, Dexys were another. And then there was a radio show where Joboxers played loads of their favourite tunes that had a huge impact.

But there’s another band that got me into Northern Soul even before I knew what it was and that was Soft Cell. They first came to mainstream notice and to massive massive success around the world with Tainted Love, which was a cover of an old Gloria Jones classic. And later one of their singles was a cover of What, originally performed by Judy Street (there’s a demo version of A Solid Bond In Your Heart by The Jam which steals the intro funnily enough from the same year).

Soft Cell are one of my favourite bands of the early 80s. I was a synth kid back then, a love which returned when dance music took off. I’d just never heard anything like those sounds before, and even now I get shivers when I listen to some of those tracks. And there’s something about synth tunes that lends itself to extended versions. Soft Cell, like the Human League and Spandau Ballet, were at their best on extended versions of the tunes. In Soft Cell’s case their 12″ versions weren’t remixes or even simple extensions where the drums carry on for five minutes. They were very different versions, with more of the song, more of the synths and on another fave Say Hello Wave Goodbye a beautiful instrumental passage that is simply spine tingling.

I’m on a bit of an 80s kick right now so expect several more tunes over the next couple of weeks.

Meanwhile here is the extended 12″ version of Soft Cell and ‘What!” 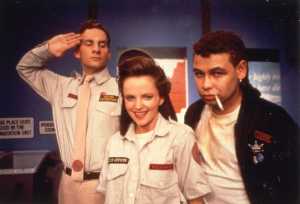 Friday night in with the family watching the soaps eating pizza and jumping up and down.  Look, it makes the little guy laugh ok?  Anyway, there was some class Northern tunes in the background on Corrie thanks to Craig Charles and his soul loving character.  And this was mentioned:

I’d forgotten this version.  It’s great, a nice little groove, much better than the Marvelettes version.

And it makes a good start to the return of Sounds For Sunday.  Which might not be on a Sunday.  Or it might.  You never know….. 😉

I’ve been listening a lot lately to Jamie T, both his latest album and the first album.  It’s quite easy to dismiss him as another Lily Allen or Streets – that is if you don’t like either of those: and I do.

But for all the modern trappings, the street slang and hip hop influences, Jamie T, a lot like Lily or Mike Skinner, harkens back to older music.  The sort of music that features in this blog and plenty of the others listed to the right.

The first Lily Allen album is covered with Specials influences.  She even sounds like Rhoda Dakar on some of the songs.  Mike Skinner again recalls The Specials, but also Madness.  Jamie T reminds me of nothing more than Weller, Strummer, and strangely on some songs Billy Bragg.

Here’s a handful of tunes, two from the first album and two from the latest. Back In The Game does early one man and his battered guitar Bragg on a dodgy sounding bass; If You’ve Got The Money is pure Strummer and Jones with the line about the ‘Buddy Holly hiccup on the karaoke’ evoking Joe so much that it’s spooky. Meanwhile Sticks N Stones references The Jam and is almost a rewrite of Thick As Thieves; and Chaka Demus reminds me of Mick Jones in Big Audio Dynamite, with a lovely Northern Soul/Hip Hop groove.